History of Women In Dentistry

This month, DentalCPAs is celebrating Women in Dentistry. Even though roughly half of dental school graduates are female, women still represent just 30 percent of dentists nationwide. In September, discussions on our blog and social media will focus on the contributions and unique challenges of women in dentistry. Follow us on Facebook, Twitter, and LinkedIn using @dentalcpas to stay updated on the conversation.

Women in Dentistry: A Look Back Through Time

Dentistry wasn’t always an accessible field. Until the turn of the 20th century, all but a few dentists nationwide were male, and many dental schools at that time refused to admit female students. That all changed with Lucy Beaman Hobbs Taylor. She became the first woman to earn a DDS degree in 1866, more than 25 years after the first dental college opened. She opened her dental practice before earning her degree, since the Ohio College of Dental Surgery initially refused her enrollment. Read more about Dr. Hobbs Taylor here.

Because Dr. Hobbs Taylor practiced dentistry for several years on her own, the Ohio College of Dental Surgery waived the traditional coursework requirement, and she took just one class before earning her DDS. In 1869, Henriette Hirschfeld-Tiburtius became the first woman to complete dental school, start to finish. She graduated from the Pennsylvania College of Dental Surgery.

While Dr. Hobbs Taylor was recognized as the first woman with a DDS degree, the honor of first female dentist belongs to Emeline Roberts Jones. She taught herself basic fillings and extractions in secret, and joined her husband’s Connecticut dental practice in 1855.

1892 marked the beginning of The Women’s Dental Association, which had 12 founding members.

In the time since Dr. Hobbs Taylor and Emeline Roberts Jones, dentistry was beginning to change – slowly. Little more than a few dozen dental school graduates during this time were female. Dental schools were just starting to “experiment” with admitting female students. It’s estimated that around 1950, about 1 in 55 dentists was a woman. In 1945, four dental colleges still refused to admit women: Harvard, Georgetown, St. Louis University, and the University of Kansas City. 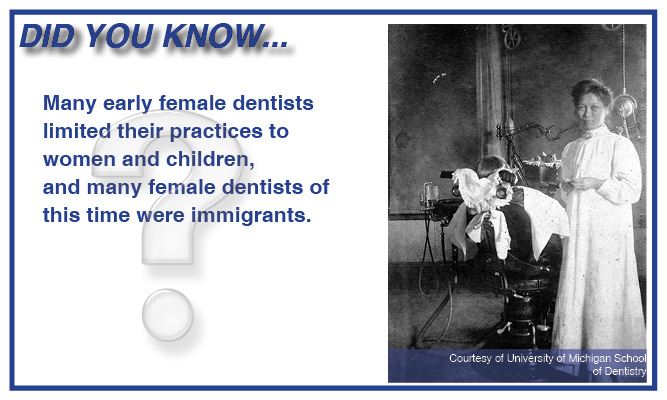 The 1920s were important for women dentists; they began to organize groups and associations within the profession. In 1920, the ADA admitted its first female delegate: Maude Tanner. The following year, the American Association of Women Dentists (formerly known as the Federation of American Women Dentists) was formed. M. Evangeline Jordan, a pioneer in pediatric dentistry, was the first president. Finally, in 1923, Omicron Kappa Upsilon, the American dental honor society, admitted its first female inductee: Anita Martin. 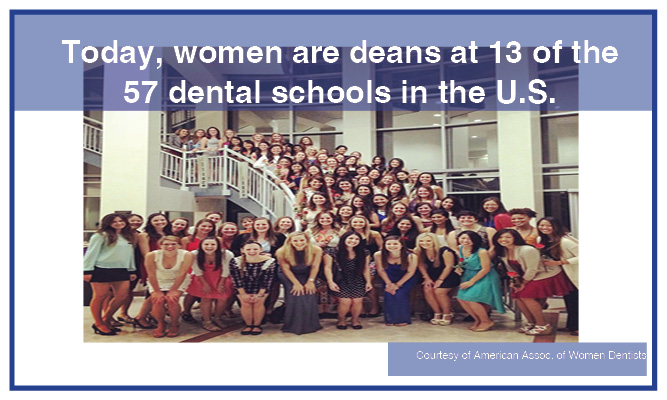 The number of female dental school graduates skyrocketed in a decade, from less than five percent in 1976 to 22 percent in 1986. In 1991, Geraldine Morrow became the first woman president of the American Dental Association, and represented the earlier years of women taking more leadership roles in dental organizations.

In 1991, the Office of Research on Women’s Health was established within the National Institute of Health. Its purpose was to support women’s advancement in health research and health careers. This coincided with the Federal Glass Ceiling Commission in the same year; its goal was to identify and eliminate career obstacles that women and minorities face.

Representative of a larger movement, in 1997 Mattel unveiled Dentist Barbie, although at the time most attitudes toward “smart” Barbie dolls were still stuck in an earlier decade.

The past 17 years have seen dramatic changes in the dental profession. Women have started to occupy more leadership roles in dental societies and academics for the first time. As of 2004, a woman has occupied the senior leadership role in each of these societies. In 2009, Kathleen O’Loughlin became the first female executive director of the ADA.

Dental school graduates have an almost equal female to male ratio; in a few schools, there are more women than men. Many dentists, including many females, are specializing their practices to include cosmetic dentistry, pediatrics, maxillofacial, orthodontics, and endodontics.

Because of the desire for better work-life balance, women are helping to change the dentistry business model. More women than men are likely to pursue part-time or join group practices because they offer better benefits than private practice. More women are likely to perform pro bono work and spend more time with patients – two areas that can impact how a dental practice operates. This relationship-based approach to dentistry is already changing how dental schools admit students – based on a whole life evaluation, not just numbers on paper.

Addressing the challenges that women in dentistry face is a multi-faceted issue. The need for more women in leadership and mentor roles, more (and different) networking opportunities and better work-life balance are key areas. With the number of female dental school graduates expected to increase, we look forward to more contributions from women dentists in the future.